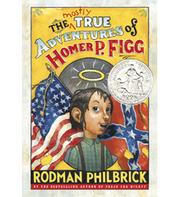 Twelve-year-old Homer, a poor but clever orphan, has extraordinary adventures after running away from his evil uncle to rescue his brother, who has been sold into service in the Civil War.